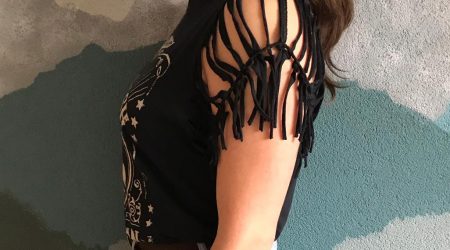 This t-shirt was ordered online a few years ago. I still like it, especially now with my newish high-waist pants, creating more shape in the total outfit as I wear it! But, I still think it is a bit boring hence an update to an existing garment!

I started to experiment. I wanted to create something I could do by hand. Cutting the T in strips and than see what I can do with that.

So, after a short time of trying I selected a method. I want to make plaits and plait through strips of fabric as I go along. I like that method better than the other tries you see, where you pick up sort of knit strips through and through each other. Maybe because fringes are common in fashion right now?

First I cut the fabric in strips around the sleeve area determining a new shoulder line, fixing one of the biggest issues I had with the shape of the shirt. With the use of three strips of fabric of another old shirt I started to braid. If you look closely you are able to see I braided a few strokes and than pulled trough one of the strips. The aim was not to have the strips of fabric be much tighter around the shoulders, but it it should lay loose around my shoulders as the original fabric.

In the end I had to cut off a bit of the length at the sleeves because the strips of fabric were much too long. The braid was placed exactly at the seam of the old shoulder seam. I am happy with the result and contemplating if I should do something similar with the neckline, although I am not sure what at the moment. What do you think?